Maison Dieu upgraded to Grade I by DCMS, as extent of William Burges interior is revealed

We are delighted to announce that following our recommendation and subsequent application to Historic England and the Department of Culture, Media and Sport, Dover’s Maison Dieu has been upgraded from Grade II* to Grade I.

We have been working with Dover District Council, Dover Town Council and the Dover Society for the last couple of years on the Maison Dieu, undertaking feasibility work and preparing a funding bid to the HLF. As part of this a significant amount of research has been carried out by specialists such as Rena Pitsilli-Graham, Haverstock and Hirst Conservation Ltd to better understand the building, the result of which has been the discovery of a much greater extent of decoration by the flamboyant architect-designer William Burges, of Cardiff Castle fame. The significance of this and the mediaeval elements of the building are only just starting to come to light with Paul Reeves, an expert on William Burges, calling the decorative scheme ‘one of the most important interiors of the 19th century’. We are thrilled that the significance of this building has been recognised and hope that this will bolster the bid to the lottery to reinstate this fantastical interior and open the building to new uses and visitors.

Please find below a press release from Dover District Council:

Dover’s 800-year old Maison Dieu, also known as Dover Town Hall has been upgraded from a Grade II* to a Grade I listing by the Department for Culture, Media and Sport (DCMS). New research has revealed that the building is far more important than anyone suspected due largely to hidden decorative work by the flamboyant Victorian architect William Burges (1827-1881), the full extent of which has only recently been discovered.

Originally a medieval hospital offering shelter to pilgrims heading to Canterbury Cathedral, the Maison Dieu also served as a naval victualling yard, a Victorian court room and gaol, and a seat of government of the Dover Corporation.  The building was extensively remodelled in the late nineteenth century by William Burges of Cardiff Castle fame. The result is the creation of one of the most important interiors of the 19th Century.  The Maison Dieu is also designated as a Scheduled Monument.

The upgrading of the Maison Dieu to a Grade I listing comes after two years of research into its history and the discovery of a much more extensive interior scheme by Burges than originally thought. Currently much of the decorative scheme is hidden under layers of paint. Experts have undertaken testing to establish the extent of the decoration and produced images to show the original scheme, which if a recent Heritage Lottery Fund (HLF) bid is successful, will be reinstated.

The Maison Dieu is owned and maintained by Dover District Council, which has submitted a bid to the HLF for a major restoration of the building.  Reawakening Burges’ gothic fantasy, the plans will create a cultural venue that is fully open to the public and visitors for the first time in the building’s history.  Its revival will contribute to a wider programme of regeneration in the UK’s gateway town, and complement Dover’s many heritage assets to build a stronger visitor economy.

Heritage Minister, Tracey Crouch, said: “Dover Town Hall is an important part of the town’s vibrant history, and this research has revealed an intriguing new side to it.  I’m delighted that we have upgraded Dover Town Hall to a Grade I listing, in recognition of its fine architectural details and historical significance.”

Posy Metz, Listing Advisor, Historic England, said: “Dover is not short of important heritage, but the Town Hall, which incorporates the remains of the Maison Dieu, is one of its gems. The building fully deserves being upgraded to Grade I, the highest level of listed buildings. It was restored in the mid-19th century and substantially extended in the late 19th century by William Burges, a Gothic Revival architect of considerable renown. Burges’ decorative interior paint scheme, currently hidden by layers of later paint, waits to be revealed once more.

“The building retains significant medieval fabric as well as 19th century work of high quality design and craftsmanship. Much of its architectural detail survives, including fine stained glass windows, and an evocative series of 19th century prison cells beneath the great Stone Hall.”

Cllr Paul Watkins, Leader, Dover District Council, said: “The Maison Dieu is the most prominent historic building in Dover town centre and we are committed to both protecting it, and making it accessible.  We’re delighted that DCMS has given the Maison Dieu a Grade I designation and we look forward to realising our plans to help more people appreciate this historic and architectural masterpiece.”

Visualisations of proposed reinstatement provided below: 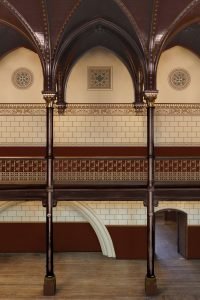 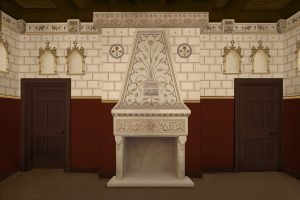